Calculations on the house

In his writeup in the Guardian’s Comment is Free, Billy Bragg does a spot of mathematics to calculate just how many new peers would be necessary for David Cameron to get the Lords to “represent the voter’s wishes”. 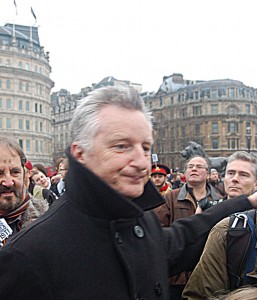 The Billy Bragg-onomics proves that we’d need a house of 1,509 lords to achieve this assuming we still can’t kick lords out (we can only encourage them to resign permanently).

He also notes that assuming DC wants to reflect seats won rather than votes cast, then we’d need even more nobles, bringing the total to more than 3,000.

Of course all of this could be solved by reforming the upper house, but hey – when a decision’s been made, it stays made, right? I mean just look at fox hunting, various rates of income and inheritance tax, the green bank, subsidies to green energy and the Human Rights Act… once settled they stay settled – they don’t call them Conservatives for nothing.

See also DivisibleByZero’s own thoughts on the news.

Photo is BillyBraggAtDemo23Jan2010.jpg by Andy F, licensed under CC-BY-SA-3.0

Portcullis is Crowned Portcullis, in the public domain, modified by DivisibleByZero.

Tory Lords on the way by the boat-load

Clean energy – another $1bn from Gates