We came across a museum exhibit about the ancient Greeks. It’s an old quotation, being given at the end of the first Peloponnesian war in 404 BC but stirring enough still to repeat an excerpt here. 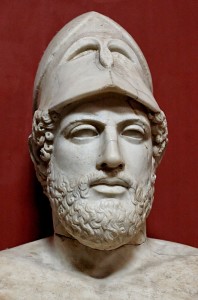 Our constitution does not copy the laws of neighbouring states; we are rather a pattern to others than imitators ourselves. Its administration favours the many instead of the few; this is why it is called a democracy. If we look to the laws, they afford equal justice to all in their private differences; if no social standing, advancement in public life falls to reputation for capacity, class considerations not being allowed to interfere with merit; nor again does poverty bar the way, if a man is able to serve the state, he is not hindered by the obscurity of his condition. The freedom which we enjoy in our government extends also to our ordinary life. There, far from exercising a jealous surveillance over each other, we do not feel called upon to be angry with our neighbour for doing what he likes, or even to indulge in those injurious looks which cannot fail to be offensive, although they inflict no positive penalty.

Bust of Pericles photo from Wikipedia.

Am I worth less than a robot?