Tory Lords on the way by the boat-load

Hot on the heels of the Lord Sewel scandal, David Cameron has vowed to create ever more Tory peers to fill the House of Lords. 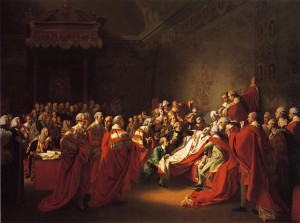 The Collapse of the Earl of Chatham by John Singleton Copley

Despite indications that he would curb his use of his powers to elevate supporters to the lords, he seems set on tipping the balance in the upper house. This is particularly crucial because of the very slim majority the Conservatives hold in the lower house.

Back in 2011, David Cameron joined forces with Nick Clegg to launch the reform bill, which would have replaced (most of) the chamber with an elected body, each serving 15 year terms. This was ditched the following year due to widespread opposition from within the Tory ranks and instead a very watered down version came into law in 2014, giving lords the ability to resign and/or be kicked out if imprisoned for more than a year.

Of course the coalition agreement also promised to “put a limit on the number of special advisers”. Which it did – just not a very small limit. The number went from 78 under Gordon Brown to 68 at the start of the coalition, to 70 today. That’s hardly a far-reaching reform of an underdemocratic system.

Under the last coalition government, the official line was that whilst they yearned for reform of the House of Lords, in the interim “Lords appointments will be made with the objective of creating a second chamber that is reflective of the share of the vote secured by the political parties in the last general election”
The current make-up of the upper house is 226 Tory Lords vs 212 Labour, 101 Lib Dem, 4 DUP, 2 Plaid Cymru, 2 Ulster Unionists, 3 UKIP, 1 Green, 179 cross-benchers and 53 others (Lords Spiritual and non-affiliated).

This actually more proportional to the 2015 voting record, at least for the Tories, than the distribution of MP seats (see chart).

Rather than crying foul and flooding the upper chamber with more Tory Lords, Mr Cameron ought to focus on bringing balance to the smaller parties such as the Greens.

If he used the voting proportions to allocate new lords, then the Greens should be awarded a further 20 seats, and UKIP 67. Since he has given up on Lords reform in general, this would at least allow him to say he had brought about a slightly more representative upper house. 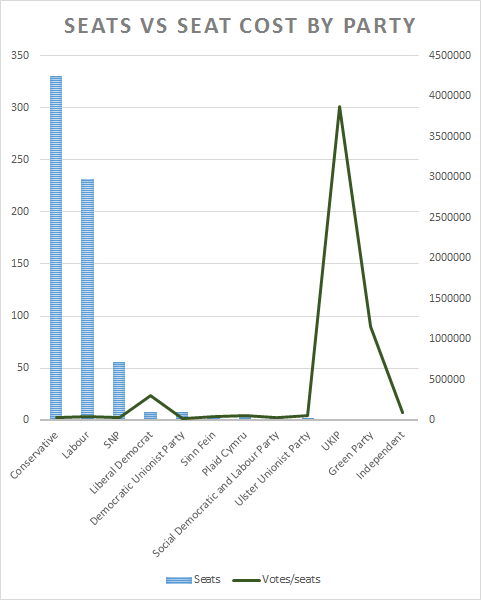 Much has been made of the truly disproportionate results in the 2015 general election. It cost the SNPs a mere 25k votes for each seat they won, vs the Green Party’s 1.1m and UKIP’s 3.9m. Let’s hope Mr Cameron tries to make the upper house representative instead of taking the easy option and making it look like the Commons.

Charts are original research by DivisibleByZero, licensed as https://creativecommons.org/licenses/by-sa/3.0/

Picture is The Collapse of the Earl of Chatham in the House of Lords, in the public domain.

Portcullis is Crowned Portcullis, in the public domain, modified by DivisibleByZero.